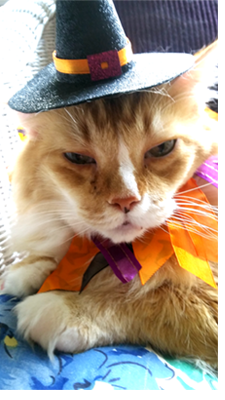 So don’t judge me. It was a nightmare when Mom tried so many costumes on me that we were both exhausted and cranky. Now they are in the donation bag. Some she had bought and some were sent to me as gifts. Like some middle aged folks, I have a bit of a tummy to go along with my overall weight problem. This makes it impossible for regular cat costumes to fit and the small dog ones are also too tight. I refuse to go to a medium size dog costume.

So….we improvised with these little cuties. She says I have to wear them when the trick or treaters come to the door. She thinks they will ooh and aahh over me because I’m so cute, but we all know they are out for as much candy as they can get (and I don’t blame them. I’d run to the next house if I could). Thanks to everyone that sent my brother Junior good wishes from the last newsletter. He’s still hanging in there and eatin’ us out of house and home.

The World Series is on!! And the Cubbies are out! Even if you don’t really like baseball, you have to appreciate the talent of the players who reach this level of play. See if you can guess the answers to these World Series Trivia questions.