As some of you already know, my boy Chester died suddenly on February 8th.    He was eating his treat at 11am and was fine.  By 12:30 he was gone.  He had an enlarged heart, which I didn’t know about, and was actively dying when I got him to the vet.  I have heard more than a few stories from people about their furry pals who suffered a sudden death, and not one of them knew about the enlarged heart issues. Chester was mostly a willing participant in whatever I decided he should have an opinion about.  That included holidays, flood photos, disdain for the Patriots and his pursuit … END_OF_DOCUMENT_TOKEN_TO_BE_REPLACED

So Christmas and New Years are over. It’s back to school for kids and no holidays to look forward to for quite a stretch. When I was in school, Martin Luther King Day did not exist and neither did President’s Day. We were looking at no breaks until Easter. How did we occupy our time? Weather was a big factor and so was what you got for Christmas and how long it lasted. By the end of January, I’d used up all the supplies that came with my Easy Bake Oven. No more tiny muffins or miniature cakes. My brother had broken or lost at least half of his toys, but thank God, huge snow storms saved us … END_OF_DOCUMENT_TOKEN_TO_BE_REPLACED

It’s almost here! All the hustle and bustle for gifts, food, parties and all other things holiday is right around the corner. I look forward to spending the holiday with my kids and grand-kids, visiting with friends and taking time to relax and reflect. I wish all of you a very happy season and good health and prosperity in 2018. In the meantime, let’s talk toys! Most of the toys when I was a kid were pretty simple, with pretty simple names. Crayons were crayons. Deluxe boxes had 64 with a built in pencil sharpener. Today crayons are marketed as “Inspiration Art Cases.” Gone is the … END_OF_DOCUMENT_TOKEN_TO_BE_REPLACED 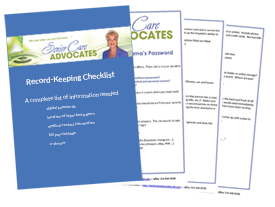 Your Mom has been independent and handling all her own affairs. Then, she is in a car accident which incapacitates her for six months. How will you access digital information without passwords? Are you knowledgeable about the location of medical and personal records? How do bills get paid? Request your free checklist so you can be prepared BEFORE it happens.